In his recent editorial article, Bo-Christer Björk (2021) has sought to explain the high costs that publishing in scholarly journals entails, while applying Michael Porter’s five forces model and a qualitative comparative analysis framework, such as in relation to other industries.

Though Bo-Christer Björk (2021, p. 177) largely argues that the low levels of the threat of substitute service providers, high levels of entry barriers to the publishing market and low levels of the bargaining power of customers and suppliers have led to high levels of concentration in the scholarly journal publishing industry, a closer look at the underlying information reveals a different analytical picture. The underlying hypothesis of Björk’s (2021, p. 177) paper is that high levels of concentration in this market allow its players to enjoy high price levels for their products and services, in reflection of the supply and demand dynamics also observable in other markets. In the framework of Porter’s model, industry rivalry, the bargaining power of suppliers and customers and the treat of new entrants and substitutes comprise the key five market forces.

Applied to the publishing market, industry rivalry primarily occurs among large international publishers, e.g., Elsevier, Wiley-Blackwell and Springer Nature, university presses, e.g., Oxford University Press, and scientific societies, such as the American Chemical Society. From this perspective, in the scholarly journal market, Open Access publishers, such as the PLoS, MPDI and Hindawi, represent the threatening new market entrants. In the value chains of journal publishing, scholarly authors, editors and reviewers act as output suppliers, whereas university libraries, library consortia and subscribing institutions represent the customer side in this market. Additionally, digital platforms and repository servers, such as ResearchGate and arXiv, are likely substitutes to the services that incumbent market players provide (Björk, 2021, p. 179).

Given that in the journal publishing industry, its offerings can be conceived of as complementary goods and the market demand of end customers is inelastic, i.e., price insensitive, this leads to relatively low levels of industry rivalry. Moreover, given that in many cases university faculty are explicitly required to produce scholarly articles and render review services by their employment arrangements, this further reduces their bargaining power, in addition to their multiplicity, which drives the demand for publishing services upwards. Similarly, the lock-in mechanisms, arrangement complexity and inflexible demand likely contribute to the low levels of libraries and subscribers’ ability to bargain vis-à-vis journal publishers. Additionally, despite the low levels of technical barriers for entry into this market, the competitive nature of journal publishing and the continued importance of impact performance for article visibility and career success maintain the strong market positioning of highly ranked journals, as opposed to Open Access competitors. Likewise, in spite of the presence of institutional repositories and Open Access mandates, leading publishers do not appear to be significantly threatened by the substitute offers of Open Access servers or platforms (Björk, 2021, p. 180-186).

While using existing Porter’s five forces analysis results for other industries, such as video streaming, hotelier business, and mobile phone, prescription drug and automobile manufacturing, Björk’s (2021, p. 187) concludes that the levels of market concentration in the journal publishing sector are not significantly higher than in other ones. Yet, based on Dul's (2016) methodology, a necessary condition analysis of that comparative information also suggests that for these industries the main preconditions of market concentration are two factors – industry rivalry and the bargaining power of customers. For the publishing industry, the recent acquisition of Hindawi by John Wiley & Sons serves as an illustration for the first factor, as this merger strengthens the competitive position of the Wiley-Blackwell division of the former corporation. With regard to the second factor, Björk’s (2021, p. 187) data indicates that for low to medium levels of the bargaining power of customers, such as libraries vis-à-vis journal publishers, the degree of market concentration remains medium level, whereas only high levels of this factor are associated with a wide variation in the degree of concentration from low to high levels.

Björk, B. C. (2021). Why Is Access to the Scholarly Journal Literature So Expensive? portal: Libraries and the Academy, 21(2), 177-192. Retrieved from https://harisportal.hanken.fi/en/publications/why-is-access-to-the-scholarly-journal-literature-so-expensive.

The analysis above indicates that only two of the five market forces, as defined by Michael Porter, are necessary for an industry to have high levels of concentration, such as few dominant players accounting for the majority of the output. Additionally, a qualitative comparative analysis perspective, such as proposed by Ragin (2009), across the industries that Björk has researched (2021), suggests that either of these factors, i.e., industry rivalry or the bargaining power of customers, can also be sufficient to arrive at high levels of industry concentration. However, this does not seem to be fully applying to the journal publishing industry, for which low levels of both industry rivalry and the bargaining power of customers have been found to exist. Furthermore, a complex causal solution, rather than a parsimonious one, that applies to all of these industries, as described by the qualitative comparative data of Björk (2021, p. 187), suggests that all of the Porter's market forces are relevant for high market concentration. Namely, qualitative comparative analysis results indicate that high levels of industry, low levels of the bargaining power of suppliers, high levels of the bargaining power of customers, and low levels of the threat of new entrants and substitutes are likely to lead to high levels of industry concentration. In other words, on the one hand, Björk's (2021) conclusions fall short of accounting for data variation across the sampled industries, since what holds for the publishing industry does not seem to be the case for other industries. Conversely, on the other hand, this configuration of causal factors has only been found to be present for the mobile phone making industry. Therefore, there are likely limits to the degree to which journal publishing can be compared to other industries. Yet, to the extent that its market concentration levels can be compared to those in other industries, the factors contributing to or detracting from the level of this outcome variable may also need to be established in comparison to other industries, rather than via treating the journal publishing industry as a case study. 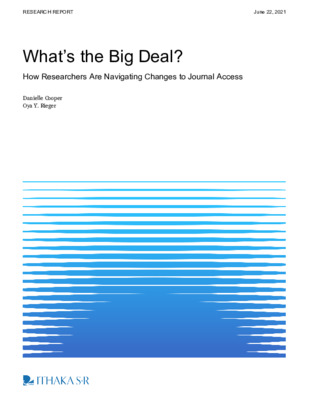 Pablo Markin
Evidence Based Medicine and the Replication Crisis: A View From Outside
Reputation Systems
News

Evidence Based Medicine and the Replication Crisis: A View From Outside 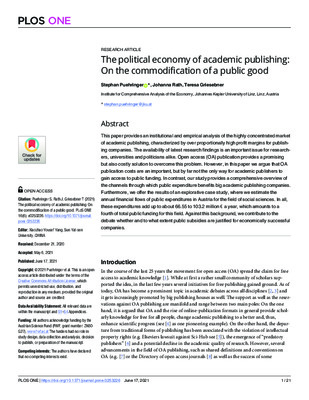 Puehringer, Stephan, Johanna Rath, and Teresa Griesebner. "The political economy of academic publishing: On the commodification of a public good." Plos One 16.6 (2021): e0253226.