In their recent report on the implications of Open Access read-and-publish agreements for the publishing market, Annemieke van Barneveld-Biesma and colleagues have presented analytical conclusions concerning its different development scenarios.

Among the key findings of this report is that across European countries, based on Scopus and Unpaywall data, the absolute majority of scholarly output published between 2008 and 2019 continues to be in Green Open Access, which involves access embargoes, subscription options and, likely discounted, article processing charges (APCs). In contrast, for this period, the share of scholarly content in Gold Open Access, which entails up-front, author-facing APCs, but immediate universal free access to readers, thereafter, varies from as little as 10%, e.g., in France, to slightly more than 20%, e.g., in Croatia. In other words, transformative, read-and-publish agreements, as has recently been concluded between the University of California and Springer Nature, represent the results of negotiations between different stakeholders, such as libraries, universities, publishers and funders.

The eventual success or failure of these agreements is also, therefore, dependent on the interplay between supply and demand forces in the markets in which these agents participate. More specifically, largely APC-dependent Gold Open Access journals likely have to compete with closed-access or non-Gold Open Access periodicals in terms of their scholarly impact performance for researchers, as APC-paying customers, or universities as subscription agreement participants. The financial resources that countries, institutions and disciplines have were also found to be critical for the eventual progress toward either Gold or Green Open Access, as systems that constitute alternatives to traditional, closed-access publishing models. Additionally, the presence of publisher-facing contract transparency, such as due to the absence of non-disclosure agreements, and country-level policy frameworks are likely to facilitate market-wide transitions to Open Access.

As research funders increasingly demand publishing in Open Access from their grantees, university, policy-making and political support in favor of Open Access models appears to be following suite as well. Yet the report by van Barneveld-Biesma et al. also indicates that Green Open Access can contribute to the preservation of classical publication models, such as by adding post-print repositories to subscription-based agreement frameworks. Thus, read-and-publish, transformational contracts will need to demonstrate their long-term viability as against both publisher-owned and community-owned Open Access journal publishing platforms.

On the one hand, preserving arm’s length relationships between funding bodies, university libraries and publishers is likely to be critical for maintaining academic freedom, such as via quality assessment and assurance procedures. On the other hand, the findings of van Barneveld-Biesma et al. suggest that with respect to read-and-publish agreements, a significant trade-off between the interests of university consortia and publishing corporations can be expected to exist, such as in relation to community-driven innovation and contract transparency in the field of scholarly publishing.

Especially for researchers in the fields of humanities and social sciences, community-supported Open Access platforms can be a preferable future scenario for the publishing market, since they can equally account for the interests of readers, authors, funders, consortia, universities, libraries and publishers, such as due to their universal access, financial sustainability and cost transparency.

Pablo Markin
about 1 year ago

As the report this post analyzes further suggests, different Open Access models are capable of maintaining the balance between the interests of their various stakeholder groups, such as in relation to their costs, to a dissimilar extent, which will likely determine their future viability as well. 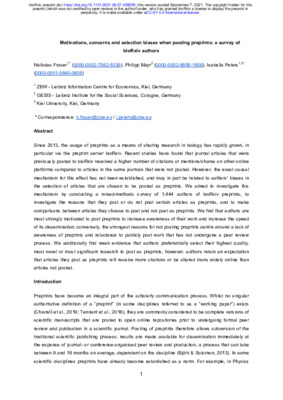