Published by the University of Toronto Press in 2018, Machiavelli and the Politics of Democratic Innovation, written by Christopher Holman, has become available in Open Access at the Open Research Library last year, as part of the KU Select 2018: HSS Frontlist Books collection. 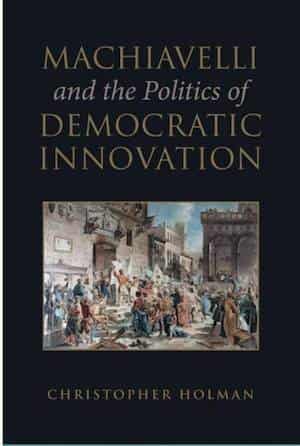 In this monograph, Christopher Holman uses original readings of the texts by Niccolò di Bernardo dei Machiavelli, Renaissance-period Italian writer and philosopher, to develop a new theoretical model of democratic practice. In Machiavelli and the Politics of Democratic Innovation, Holman identifies two unique ideas in Machiavelli through his rearrangement of Machiavellian concepts. The first idea, drawn primarily from The Prince, originally circulating in manuscript form from 1513 under the title Il Principe in Italian or De Principatibus in Latin that Machiavelli published posthumously as a printed book in 1532, is an image of the individual human being as a creative subject that seeks the exteriorization of desire via political creation. The second idea that Holman proposes is drawn primarily from The Discourses on Livy, composed under the title of Discourses on the First Ten Books of Titus Livius, Discorsi sopra la prima deca di Tito Livio in Italian, in 1517 and published in book form in 1531, in which Machiavelli discusses, among other topics related to the Roman republic, different types of government, such as monarchy, democracy and aristocracy, he considered as good ones, in contrast to  tyranny, anarchy and oligarchy that he deemed virtue-less. Thus, Holman’s second idea is an image of the democratic republic as a form of regime in which this desire for creative self-expression is universalized, all citizens being able to affirm their psychic orientation toward innovation through their equal access to political institutions and orders. Such institutions and orders, to the extent that they function as media for the expression of a fundamental human creativity, must be arranged so that they are capable of continual interrogation and refinement, according to Holman.

In the introduction to his work, Christopher Holman has briefly outlined its objectives as follows:

“On the one hand, it looks to contribute to the history of political thought by providing a new interpretation of the political theory of Niccolò Machiavelli, whose perpetually studied works have garnered even more recent attention as a result of the quincentenary of the production of several of them. On the other hand, it seeks to develop a new theoretical model and ethical defence of democratic practice, of radical democracy in particular. Speciﬁcally, the new method for thinking radical democracy will be mediated through a detailed consideration and reinterpretation of the texts of Machiavelli. The deployment of a ﬁve-hundred-year-old oeuvre for the sake of advancing a contemporary theoretical tradition that, even if it may trace its roots to ancient Athens has only emerged as a somewhat uniﬁed philosophical ﬁeld recently, will no doubt strike some as a suspicious intellectual endeavour. The fact that this oeuvre is the Machiavellian one may only add to the suspicion. After all, the subject of Machiavelli studies is a notoriously partisan one. Claude Lefort does not overstate the case when he writes that here “the variety of interpretations and opinions, the depth of conﬂict, as well as the intensity of the critical passions, reach their highest degree.” The Machiavellian text is not so much an object of disinterested scholarly interpretation as a ﬁeld in which contending forms and traditions of political thought, with their own ontological and normative assumptions regarding the being of politics, deploy the Florentine secretary in an effort to advance their particular commitments. […]

The democratic ethical imperative is grounded in both the perception of the universality of the human desire for self-creation, but also the recognition of the need for the productive rechanneling of this desire into socially useful ends via a project of autonomous institutionalization. If the latter is not achieved, if desire is not institutionally mediated, the society will regress into a form such as is detailed in Machiavelli’s Florentine Histories, where individuals attempt to advance their own private interests at the expense of other citizens, who are not seen as possessing a right to political self-expression. It is precisely because the human desire for creative expression is insatiable, however – that is, that the human is constantly redeﬁning the nature of itself and its world through its self-activity – that the form of the political regime is never capable of becoming permanently ﬁxed. Machiavelli’s republic is thus unique in that it is oriented toward its own perpetual interrogation and possible overcoming. Machiavelli’s project is to think a system of institutions that is capable, through harnessing the creative energy of the people who constitute the society, of continually calling itself into question, and through reinstituting itself provide a means for the actualization of that creative human desire that is detailed in The Prince. It is in this sense that the republic is, as Machiavelli says, the regime in which all the people “can, by means of their virtue, become princes”” (Holman, 2018, pp. 3, 11).

Philipp Hess
Open Research Community
We use cookies to help improve your experience. By continuing to browse our website you are consenting to our use of cookies.
Learn more