In their research report, Quentin Dufour, David Pontille and Didier Torny (2021) have collected their primary data for 197 transformative agreements concluded in the period 2015-2020. These agreements comprise subscriptions alongside Open Access options, such as publication tokens and article processing charges’ (APCs) discounts. With agreements from 22 countries and across 39 publishers, such as Elsevier and Springer, these authors have found significant variation in the duration of these frameworks (1-6 years) that in the majority of cases (103) involved 3-year agreements, the accessibility of their text that for more than half of the agreements (101) were not publicly available and the resultant output openness, such as with regard to copy deposition, DOI allocation or licensing terms.

Among the more salient findings of this research is the lack of workflow-level interconnection between the subscription and Open Access components of these agreements. Thus, subscribing institutions obtain reading access privileges to designated publisher content for their affiliated researchers, which is usually distinct from the journal rosters targeted for Open Access publishing. The distinct workflows that these arrangements entail reflect not only contract terms, but also corresponding financial allocation procedures, such as for cost-offset (2%), publish-and-read (40%), read-and-publish (53%) and read-and-discount agreements (3%) (Dufour, Pontille and Torny, 2021, pp. 10, 54).

Another important out-take from this study is the absence of long-term budgeting certainty that transformative agreements involve, in contrast to subscription frameworks, due to significant variations in publication volumes, cost definitions, finalized payment amounts, fee calculation methods, projected adjustments, benchmarking formulas and negotiation outcomes, also since these, sometimes experimental, frameworks are usually concluded between university or library consortia and international publishers that consider Open Access as an addition to their existing models (Dufour, Pontille and Torny, 2021, pp. 10-11).

Yet, this occurs on the background of the rapidly rising volume of these agreements internationally from 7 in 2016 to 20 in 2018 to 91 in 2020 and the strong presence of industry-leading journal publishers, such as Elsevier (16), Royal Society of Chemistry (16), Springer Nature (15) and Cambridge University Press (14). Likewise, these agreements predominantly involve consortia hailing from Western and Northern Europe. While on average, these agreements cover 25 journals, the most comprehensive of these can include up to 171 titles. Access to these journals can be granted either on a blanket basis (in 52 instances) or à la carte via title selections (in 10 cases). Similarly, the Open Access models that these models can vary from only hybrid ones, in addition to other Open Access forms and alongside APCs for immediate, Gold Open Access options and (Dufour, Pontille and Torny, 2021, pp. 20-22, 30, 40, 49).

Since these agreements can also non-exclusively involve Creative-Commons licenses differing in the degree of their restrictiveness, such as CC-BY, CC-BY-NC, CC-BY-ND or CC-BY-NC-ND, in addition to their mostly optional nature, the largely closed journal archives and predominant applicability to the periods of their duration only, this also apparently leads to the uncertainty with which these frameworks are associated (Dufour, Pontille and Torny, 2021, p. 49). As these agreements can apply to either fluctuating, fixed or unlimited output amounts with varying, usually fixed (61%), contract sums subtending these, it is likely that subscription and transformative agreements are likely to coexist in the future, also because of the significant expected variation in the costs that hybrid Open Access models will entail (Dufour, Pontille and Torny, 2021, pp. 56, 58).

Back to Players
Next 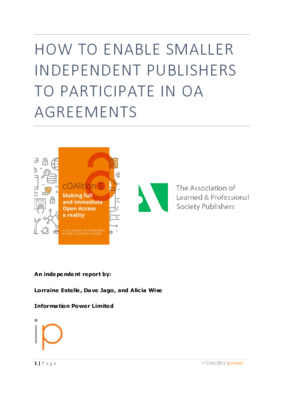