This monograph presents an in-depth exploration of the positioning that the Parisian omnibus has held in popular culture works, such as press articles and fictional texts, created during the years of this vehicle’s operation in the nineteenth century.
Pablo Markin
Community Manager, Open Research Community
Follow

In Engine of Modernity, Masha Belenky (2020) explores the cultural valences of the omnibus, while drawing on literary guidebooks to Paris, canonical novels, e.g., by Emile Zola, and caricatures and lithographs from this period, in order to inquire into the social dynamics and tensions that this mode of modern transportation has generated across different classes, genders and practices.

This book, thus, encompasses the sub-genre of omnibus literature and its textual strategies, which also serves the aim of plumbing the ambivalent attitudes toward the omnibus and modernity in this period. In this regard, this publication highlights that omnibus literature comprises works characterized by episodic structures, collaborative authorship and multi-genre narration, which associates this sub-genre with innovative modes of writing.

In a similar fashion, Belenky (2020) argues that omnibus literature captures the multiplicity of urban experiences, as it includes works of panoramic literature, conduct manuals, city guides, literary guidebooks and popular songs unified by share thematic patterns and features. Likewise, this allows this author to focus upon the manner in which these narratives used the figure of the omnibus to explore the complex social dynamics of class and gender. To achieve this, Belenky (2020) approaches the omnibus as a literary, metaphorical and metonymical figure of progress associated with anxieties about social change, class mobility, revolutionary tendencies and the visibility of women in public spaces. This apparently stems from the role of the omnibus as an ambivalent signifier of both French Republican values and their democratic potential as well as the upending of existing social hierarchies. In this regard, Belenky (2020) also traces literary associations between female omnibus passengers and transgressive sexual behavior in texts by French authors such as Emile Zola and Guy de Maupassant, in order to illustrate the status of the omnibus as a symbol of cultural ambivalence toward modernity in nineteenth-century France.

Yet as the title of the book suggests, the omnibus has also undoubtably served as an engine of Parisian modernity in that it has contributed to the transformation of urban spaces and the development of novel social and cultural practices. Indeed, the omnibus experience of the accelerated traversing of the urban space encapsulates the key features of metropolitan modernity, such as the emphasis on fragmentation, spectacle, and alienation.

On the one hand, as Belenky (2020) points out, Charles Baudelaire has famously defined literary and artistic modernity as a tense interrelationship between the immutably permanent and the fleetingly transitory. On the other hand, in historical terms, the omnibus has emerged into the public sphere of nineteenth century Paris that has was in the course of the transformation from a nineteenth century city into a modern metropolis driven by the Haussmannization associated with the large-scale reshaping of public urban spaces and the modernization of its infrastructures in the 1850s and 1860s.

Thus, the phenomenon of the omnibus has been concomitant not only with innovative literary writing during the mid-nineteenth century, but also with the emergence of mass-market literature and the popular culture. It has, therefore, reflected the advent of capitalism-driven technological innovations as well as modern forms of literature, commerce, and social interactions.

Featured Image Credits: Night Time on the Boulevard Montmartre, in front of the Théatre des Variétés, July 24, 2019 | © Courtesy of A.Davey/Flickr. 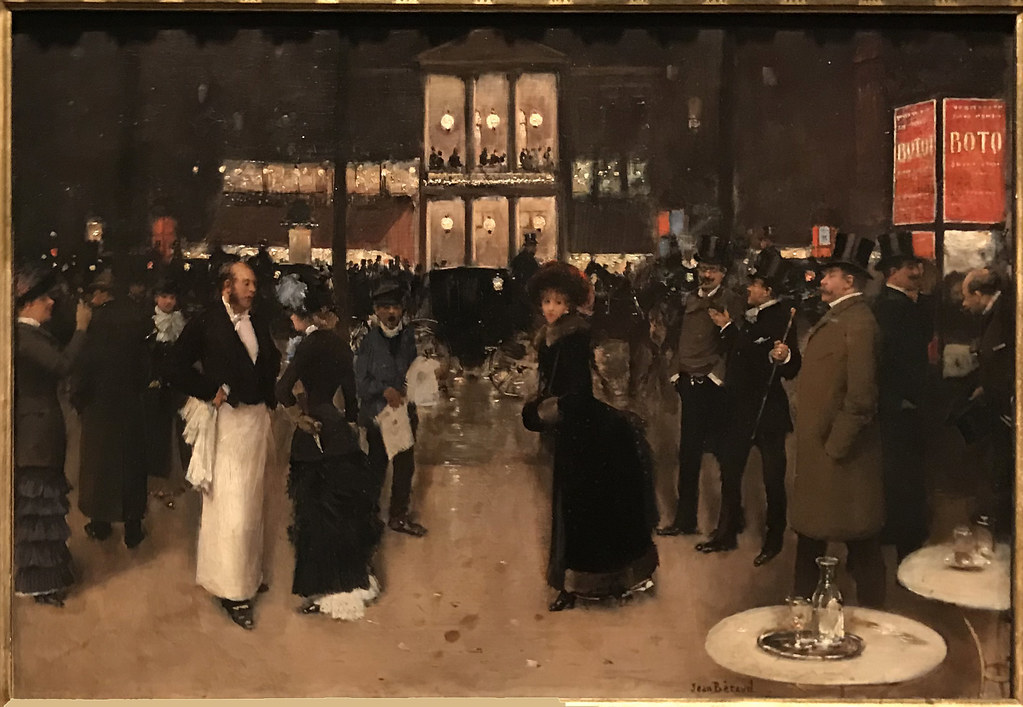 This monograph presents an in-depth exploration of the positioning that the Parisian omnibus has held in popular culture works, such as press articles and fictional texts, created during the years of this vehicle’s operation in the nineteenth century.